Sometimes something catches my eye when driving, but there isn’t always a convenient place to stop.
The view from the middle of the road that was so inspiring means going back on foot to photograph or sketch the scene or whatever it was.

Here is an example of just that. Soft light on a crossroads junction on the Wilts/Dorset border, so typical of the countryside in May, with Cow Parsley in full bloom, new leaf growth providing many different shades, and the scratchy twitter of a Whitethroat nearby.

For this sketch I used coloured pencil over a yellow pastel base. Cropping in tightly on where the lane disappears round the bend, where the maximum contrast between values in the scene, draws the eye.

The small oil study was produced later in the studio.

… and speaking of whitethroats, here’s my paper collage from a couple of years ago. Trying to capture the busy character in a few simple shapes…

I noticed this Hawthorn tree in full bloom walking down Castle Hill on the Western side of Shaftesbury.
I had a few coloured pencils to hand, so stopped to have a go. A warm and sunny afternoon where you just want to take your time and look around you. 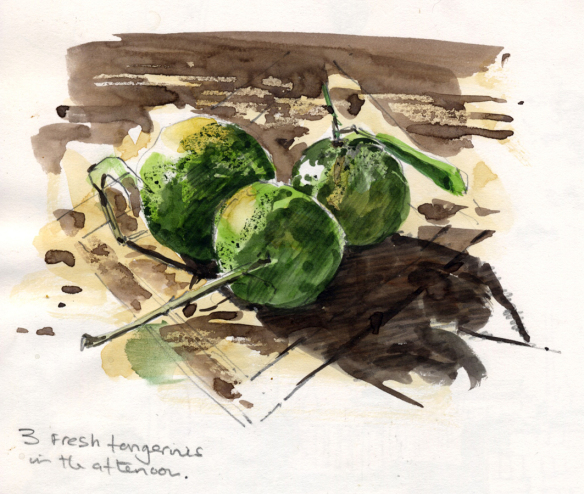 These tangerines were freshly picked a couple of hours before I painted them, and then er, ate them. Unbelievably sweet and juicy, it doesn’t get better than that. I’m used to seeing these fruits but with orange skin, or should that be ‘old’ skin!
The tangerines below, neatly piled and with peppers and kola nuts, are for sale on the street, delicately balanced in a large enamelled tray on top of the roadside drainage channel wall. 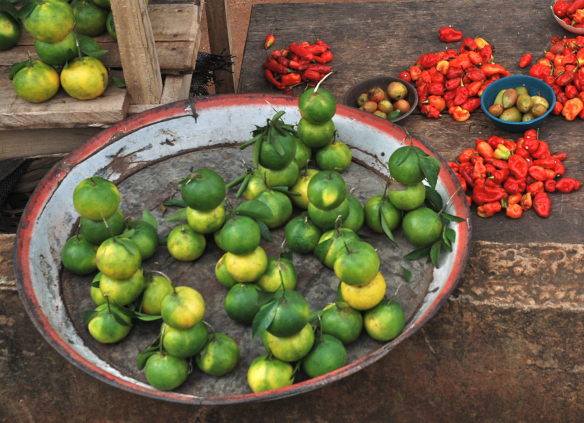 Nearby is a plot of land owned by the family, and Jumoke is developing it as a cafe and art centre. Work had just started as we visited. The site has a pretty stream with characteristic large boulders, banana plants and a tall old palm, which will make an ideal backdrop for the thatched parasol outdoor seating that’s planned. 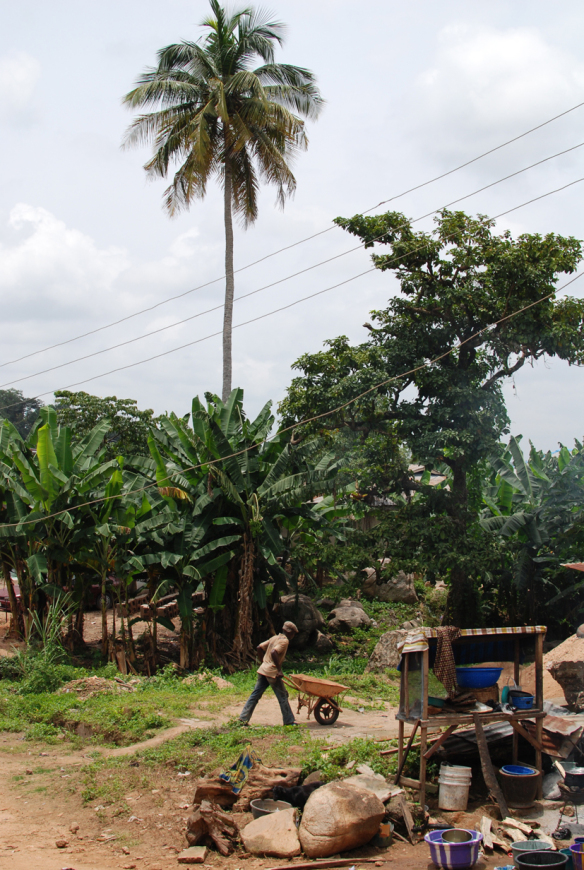 Opposite the site is a churchyard with mature trees and gardens giving the neighbourhood a relaxed suburban feel, and next to that is the Justice Development
and Peacemaker’s Centre, a Catholic charity. I sketched the poles and power lines while business was being conducted at the cafe site, and applied some watercolour later
back at base. 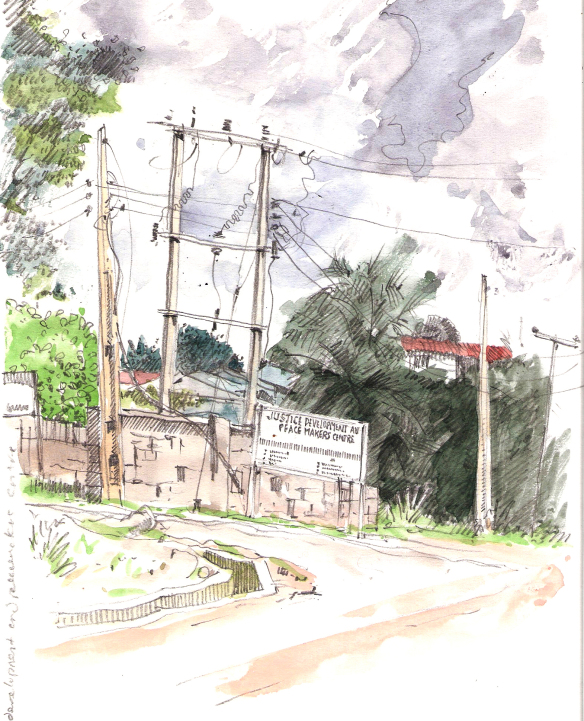 When looking for landscape subjects to sketch, sometimes there seems to be nothing, at other times everything seems to scream potential. I tend to overlook the obviously pretty landscape in favour of patterns and rhythms that catch my eye – the organic freeform mass of a tree balanced by a neat, man-made straight line for example. In this Hertfordshire lane, sketched in the late afternoon, the tree and pole frame the road
as it winds down the hill and away to the right with hedges either side.

The sun is shining through a haze of thin cloud, strong enough to cast a shadow but not enough to give a bleached out, high contrast. The school run is about to start as a yellowhammer sings from the wire. 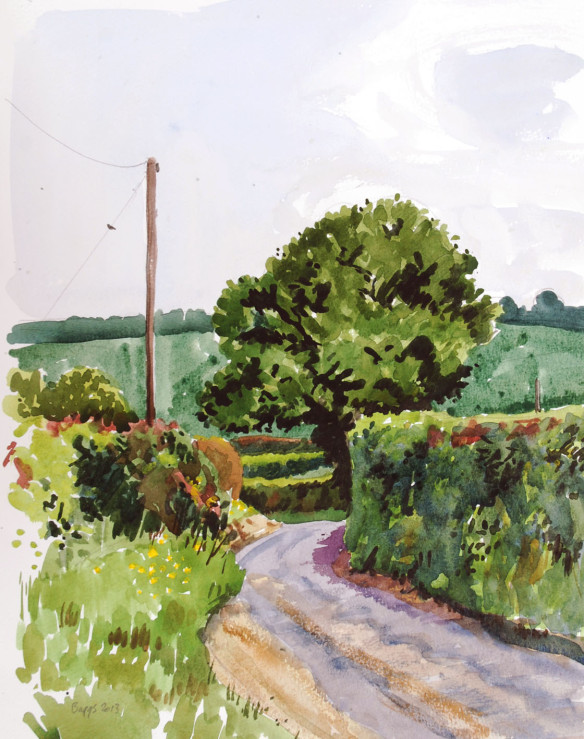 No time like the present they say, so despite the sun having gone down and darkness fast approaching, when I came across this jumble of poles near a farm in Essex I had to stop and produce a rapid watercolour, racing against both the fading light and the bugs which were giving me no mercy. The roadside vegetation was uncut and shoulder high, and the newly surfaced road had neat white lines at the edges, accentuating the bend away to the left. I used mainly Naples yellow and lamp black with a tiny amount of cobalt blue, spending only five or six minutes on it as the unwelcome attention of the biting insects was literally affecting what I was doing! Actually I think they helped in a way…suffer for your art eh? 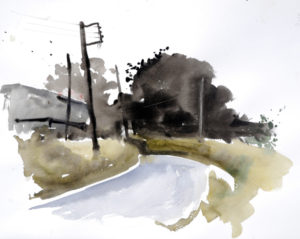 This sketch is of a similar arrangement of telegraph poles across a lane as the sun’s orange glow reflects on the hard surfaces. What attracts me to this type of scene is the rhythm of verticals but with obvious imperfection, the control with a little chaos thrown in, held together by the wires (important but kept as low key pencil lines) and in contrast to the mass of the vegetation in all its high summer green glory, turning to blues in the distance. 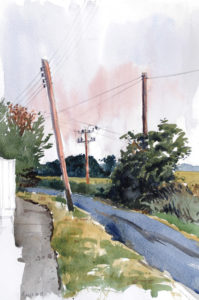 On a sunny spring day in the UK, there are many colours and sounds that take you back, sometimes to childhood, sometimes just to last year. This bench is where I’ve had many
a strategy meeting or just a gossip over a cup of coffee, or tea and a sandwich. Like an outdoor conference room. These days it’s a place of quiet reflection on what is gone, and what can be.

With so much visual excitement, the riot of orange on the Berberis, the pink and green of the flowering blackcurrant, the golden conifers thrown forward by the copper beech tree in the background, I couldn’t resist a quick rendering of the scene. It was all too easy to get distracted and want to include everything. I started to fiddle. This is invariably fatal with watercolour, laying a wash and getting its value right first time is a hard lesson to learn. Still, I was only really interested in the journey past the shrubs and across the recently mown, sun drenched lawn, down to the bench beyond the long grass.
A quiet place, and a very personal picture. 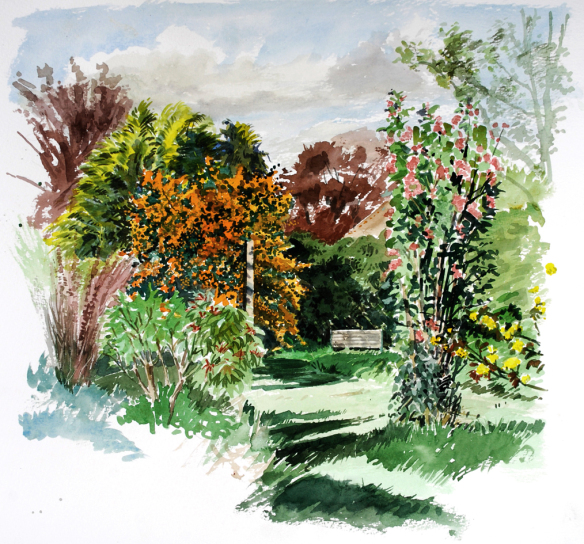 Across from the bench, in the far corner of the garden, is a neglected old toolshed.
The door has been nailed shut, and the ivy is overgrowing it, now even creeping across the broken window.
I was really attracted to the colour combination of the neighbour’s cherry blossom against the clear blue sky, the dark reds of the cherry plum tree and the fresh greens of the suckering cherry saplings in the foreground (no garden boundaries recognised by this tree). I’ve been meaning to do something with this for a couple of years now. The effect I was after was that of dappled sunlight and shade in a busy corner, but painting suggestively, without detail at all. I’m quite pleased with this one…forthright but restrained. I’ll even forgive myself for using pure cerulean … 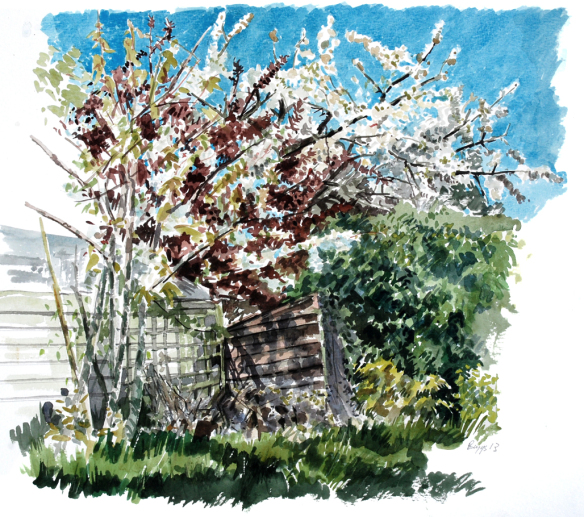 Get out there and do it: when the weather looks unkind – too dull, too dark, too cold –
go anyway, something invariably turns up that you would otherwise miss.

In a quiet country lane nearby I parked up and strolled a few yards along the road looking this way and that for a nice composition to reveal itself, and stopped just past a tree lined bend. The sky was clear, the sun had gone down leaving a cool transition between coral red, orange, gold and duck egg green, turning imperceptibly to cobalt and then indigo blue above my head. A hunting barn owl coursed up and down a metre or so above the long grass meadow, then up over the willows and on to the next patch, minutes later appearing again to try it’s luck one more time. I made a rapid pencil sketch on the spot, and tried to do something with it back indoors. 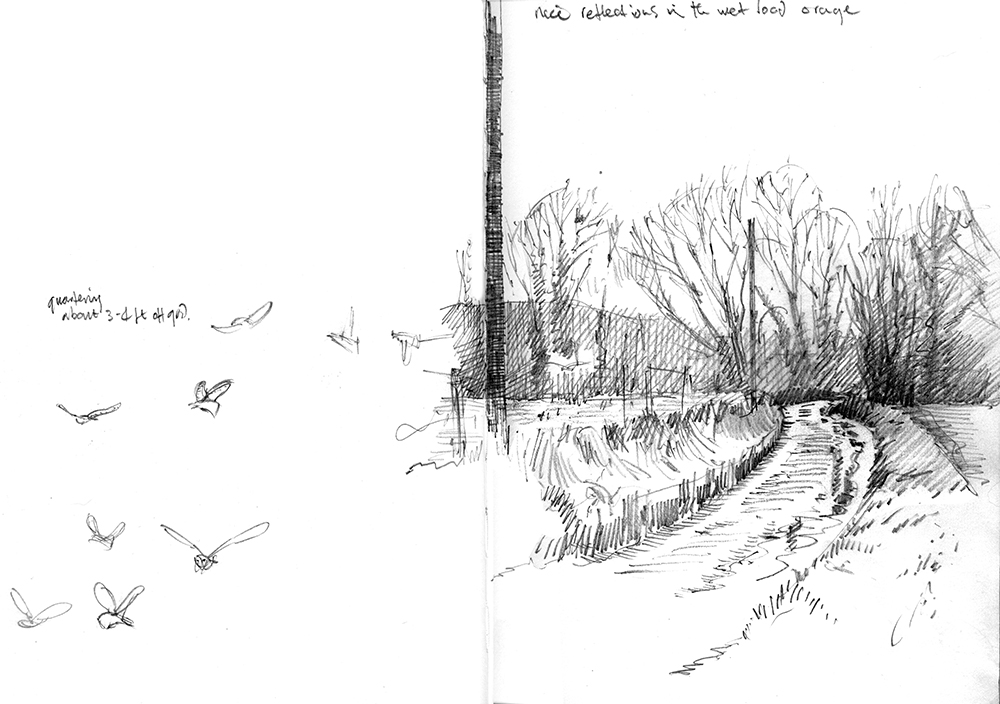 I started out thinking I would produce a coloured ink drawing but almost from the start it was not going well. Persevering, I ended up working over the whole thing in oil pastel and although I like the result insofar as it conveys my excitement at the colour, the feeling of cold air on my face and the fast approaching darkness (and seeing the owl of course), it wasn’t the picture I had in my mind’s eye…a situation I’m sure many artists find themselves in from time to time! 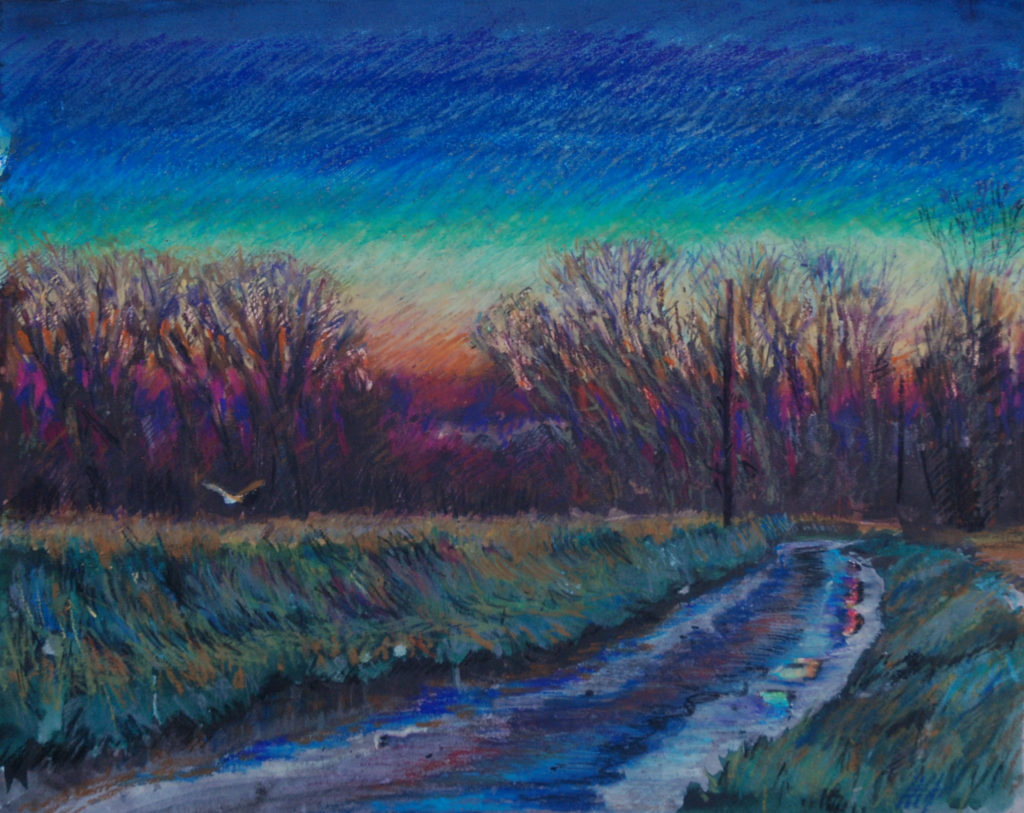 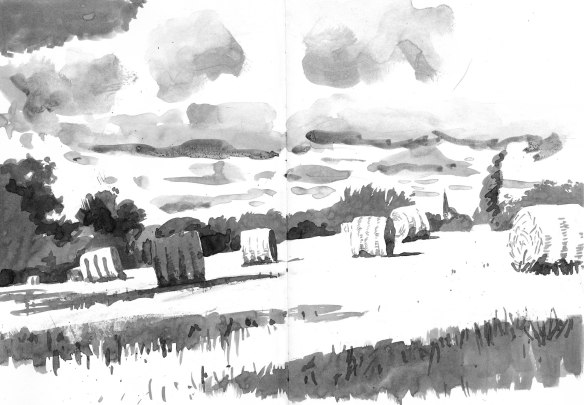 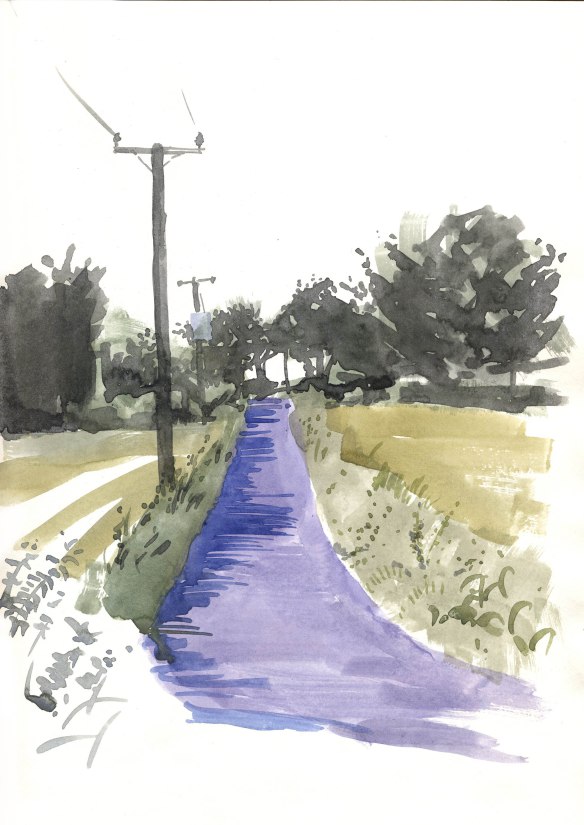 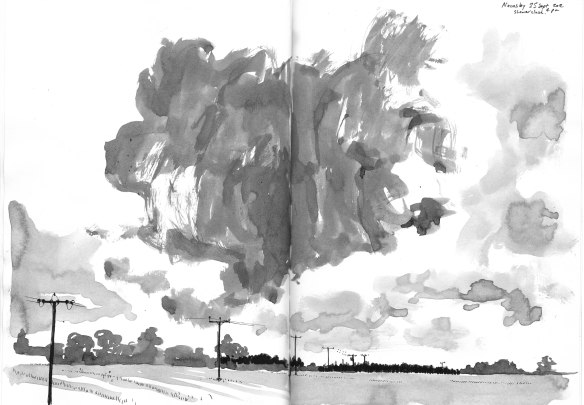