Saturday 13th May. Dawn. I’m up and ready, full of anticipation for what the day ahead brings. I take my coffee outside, where two family members have been up all night, sipping beer and keeping vigil over Baba’s coffin. The dj and his two buddies are asleep, one slumped over the music console, the others in white chairs hired for the occasion. The Naija style R&B is still playing, and is very loud. There is a feeling of premature aftermath which is difficult to explain, like it must have felt like before a day’s great battle. Time for eggs, onions and peppers.

Waheedi is late with the attire for everyone. There is tension, understandably. The outfits for immediate family including myself, are handsome and voluminous. Rich ultramarine blue and white for men, tasteful green and golden yellow for ladies. Other attendees wear outfits according to this colour dress code. Even Waheedi and family employees are to wear matching outfits it turns out, so much work, no wonder he is late!

The original idea was that Baba would spend the night at the old house in Isale Osun, but plans are flexible, and so the trumpeting, drumming, dancing cortege is on its way there now. Disappointingly (and predictably, perhaps) the road is blocked to the old house and access only possible when N15,000 is shelled out– ‘welcome to Nigeria: now bend over’. Shameful.

All captured by the official videographers, the family members and onlookers pay their respects. It is crowded and noisy, and I would have liked to have been there to see this, but we must go straight to the First Baptist Church, as time is pressing. The church stands on one of the highest rises in the town, and from its tower there will be views taking in the whole of Osogbo. The new, even larger church is being built close to the road at the front of the grounds. It is still all block work and bamboo scaffolding at this stage. There is no hurry here. Full of butterflies, bees, lizards and scorpions, the grass slopes down away from the church towards the family plot, easily seen in its white marble splendour.

The church is packed to the rafters with people, including the upper balcony. It is a big space. The walls are decoratively painted which helps create a light atmosphere, even though there is plenty of dark wooden furniture and structures. Fresh flowers are everywhere. There has already been a memorial service in Kaduna and in Jos, where Baba Lawoyin knew many people from his time there in service to the church, and the Pastor and other clergy are here today. Among the congregation are many people that have travelled long distances. They are of mixed faiths, sharing orders of service, praying and singing together. This is one of the stand outs I have learned on my travels, that people are people and will just get along, without the long nose of politics interfering. Another is the obvious contrast between this and a similar event back in the UK/West, where things are much more sombre. This is a wonderful celebration, and I know which I prefer.

Everyone looks very fine. It is refreshing. A gathering of people from far and wide to pay their respects and honour a very popular man. A man of god. There are sermons and a fine speech by eldest son, Segun, now officially head of the family. The immediate clan are invited forward to sing and clap hands at the front behind the coffin, while the band and the choir play on. It is the same choir from yesterday at the house. Tradition has it that row by row of the congregation pass by dancing, dropping money into a hat. I go round several times, in the noise and confusion not realising at first that I should be with the family too! But at least I earn the title of best dancer, which I’m sure is patronising in the kindest way possible!

After the service we attend the burial at the bottom of the grass slope. Prayers at the graveside. I start to realise I am very hot and sweating in my attire, but it won’t be long until I can relieve myself of the outer garment and fila. I take my turn to shovel some soil into the pit, and we make our way back up to the top of the hill. Suraju is close by, looking after my much needed water!

The celebrations are in a large hall in the northern sector of town. Here is where all the food cooked overnight is served (well, I am sure some of the food, especially some meat, didn’t make it that far….and went to feed some of the locals). There is an mc in a dark suit fronting a large band playing Afrobeat crossed with gospel, and some entertainment in the form of dancers and a spectacular short play involving actual fire eating. There is plenty to drink, and I must say a large whisky was very welcome. Family members are to dance while the mc chants along and mentions them by name. The better dancing the more dash placed on your forehead is the way it goes, and I am also singled out for this treatment, so having loosened up with a whisky or two I’m much less self conscious than I might otherwise be, and enjoy myself, albeit a little stiff in the hip movements! There are some really good dancers here, some young men in particular stick in the memory. There are lots of introductions and handshakes, and I know I won’t remember everyone’s name. Sikiru is here with some other lads from the house, and advises me not to wonder too far from the action as there is no security and as he puts it “not everyone is your friend”. This is good advice. 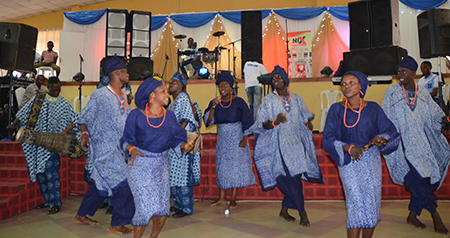 Plenty of photographs and video, both from official and unofficial sources. A photographer offers to use my camera to take pictures of me and other guests, and always on guard and alert I straight away notice him slowly wander further and further away as I chat and pose for other photos. He is hoping I will be distracted enough to not notice what he is doing, and so I retrieve my camera from him before it is ‘lost’….

Good to see the basket lady and her companions from town turn up.
(episode 5)

Eventually the party’s over. We are last to leave. It has been an extraordinary day, and I feel privileged to be here, once again.
There are more adventures before we leave Nigeria in a few days’ time, but for now Baba Gabriel Oladosu’s last journey is complete, and he is at rest.