Bala is a round, jolly young man with a very dark complexion and always smiling. Today he is showing us the nearby Zainab Saidu Usman D/Gari Orphanage, where he spent most of his childhood, but still was motivated enough to educate himself and avoid falling into the begging trap as so many disadvantaged do. Also with us is Mariam, a very tall twenty three year old wearing a cerise pink hijab. She also grew up in the orphanage. In a moment of madness and for reasons known only to herself, her mother decided to literally burn her infant feet, and so Mariam now lives life as a double amputee with scarred stumps, managing day to day using hand made leather shoes, which in reality are more like cups, and of slightly different sizes. She would benefit greatly from bespoke orthapaedic shoes that only specialists can provide.
I can’t help wondering how she’s managed all this time.

Set in several hundred square metres of ground large enough for a few trees and for growing some crops, the main building is raised above ground level by a few steps and consists of a single story square layout with a central open air courtyard. One of the dorms serves as a dayroom, with children from toddlers to teens watching tv or sleeping, sitting or lying on the bunk beds or on the bare tiled stone floor. There are forty children here, the older ones go out for the day but there is little to occupy the younger ones. One baby, asleep in a cot cleverly fashioned from steel bars and tubes and softened with two colour basketry contained a baby that had just recovered from malnutrition, looking a little thin in the arms and legs but we were assured she was out of danger. 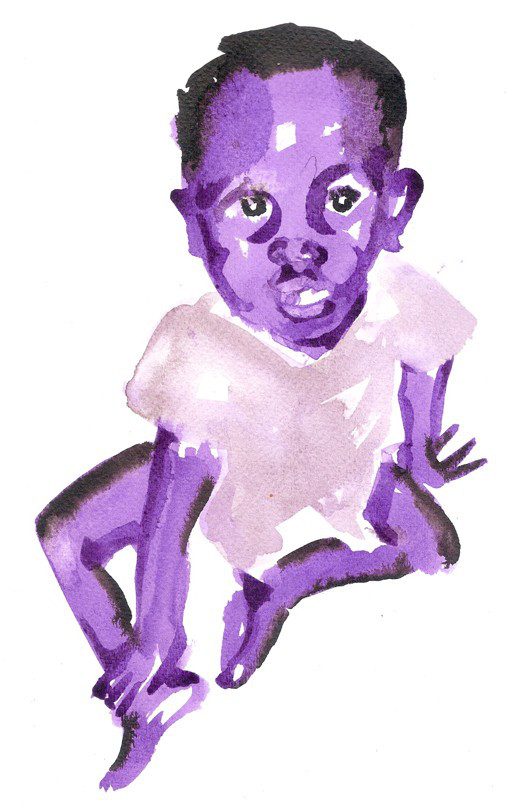 Another room was for babies, mostly sleeping in their cots. There are only two full time staff looking after all these youngsters, and they do their best. The roof leaks in places producing large stains and bowed ceiling tiles, and the air is stale and thick. Replacing all the bedding and redecorating throughout would be a good thing, followed perhaps by a rota of chores for the older kids which would help out the staff while giving them some routine and a sense of responsibility, certainly better than sitting around all day watching western tv.

Outside in the sandy yard washing is hanging on the line strung between two trees and cooking takes place over an open fire, pots large and small and the traditional wooden pestle and mortar for pounding yams (called an Odo) are strewn about. Most of the grounds look a little neglected, and the children could be actively involved in projects that could improve their environment, such as a kitchen garden or safe play area, or decorate the dorms and dark corridors with their artwork. Some of the grounds are used to cultivate crops, but the children receive no benefits from this. At the moment at least, it appears that nobody cares that much, at least they are all off the streets.
We come away with plenty to think about.