Birnin Kebbi stands on the southern edge of the semi-arid Sahel, close to the border
with Niger. Today Sanusi is driving us North to visit a working gold mine, and then
on to another, much less well developed operation in which Jumoke has an interest.

On the road out of town, the Neem trees lining the route have large puddles sitting in
their shade from last night’s rain. Business is conducted under them. It’s also common
to see boys taking time out, lying lengthways across their motorcycles, or machines.
A two hour drive on long straight roads, the flat landscape of leafy bushes, sand and
rock is broken by patches of corn, rice and watermelons. Larger trees and palms
have been left standing here and there and provide shelter from the sun and rain. 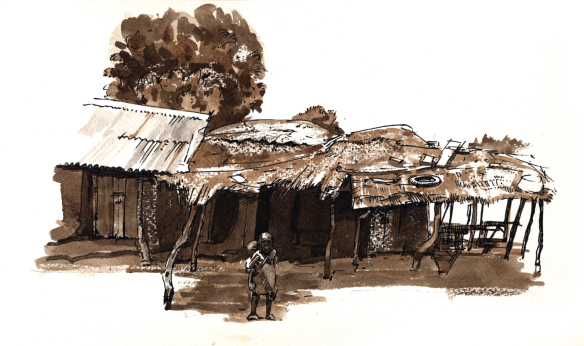 The blue horizon of higher ground is covered in rocky woodland and bushy scrub. The occasional worker in the fields, termite mounds and strange trees attract my attention as I take all this in. Some trees have the look of a baobab, cartoon-like with bunches of leaves on the end of fat branches and even fatter trunks. There are cattle egrets, rollers and kestrels, swallows and swifts, and I imagine the leopard, caracal or jackal that may be lurking in the distant rocky outcrops, staying out of site until the end of the day.

Roadside compounds are enclosed with neat mud brick walls and rustic wooden hurdles. There are lean to shelters and canopies with benches underneath for socialising, mostly in the early evening. Looking past the pile of discarded tyres and plastic litter I see that inside the walls there are round, thatched mud brick huts of varying sizes raised off the ground. I allow myself to imagine that this stockaded community style is necessary to protect livestock from wild animals. May even be true. 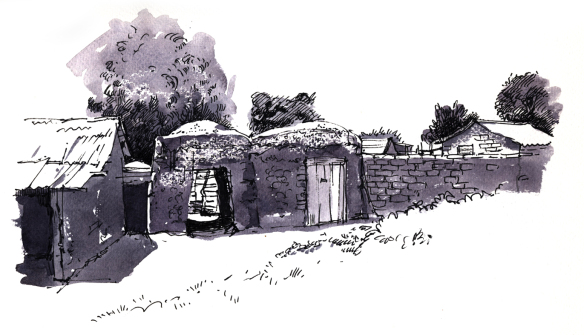 We slow down to make way for cattle and goats being herded down the highway by Fulani men and boys. Traditionally dressed with long cotton gowns and pointed straw hats, their long walking sticks are used to encourage their red Sanga cattle to keep moving. The goats follow the cattle, and some kids that are too small to keep up are carried. Two men lead camels which are fully loaded with all the equipment the group need, for these are truly nomadic tribesmen. Some Fulani, or Fula people have settled, and as an ethnic group they are spread across many African countries. There are about 7 million in Nigeria. 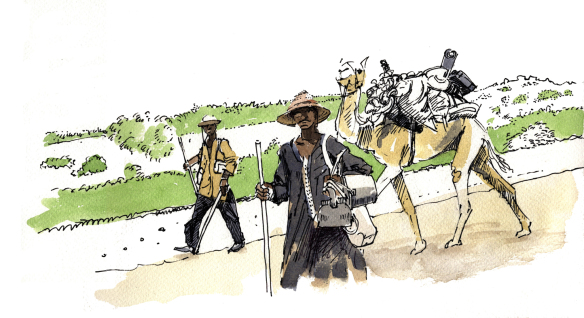 Eventually we turn off the main road onto a dirt track for a hundred yards to a corral of wooden hurdles where some men are waiting in the shade of a small tree. After a brief discussion, and a much needed leg stretch for me, a tall, thin middle aged man with prominent cheek bones and a pencil moustache leads us on his machine to the
first mine.

A short flight with local airline Air Peace and we touch down (as the only arrival today)
at Sir Ahmadu Bello International Airport, Kebbi in the north-west corner of Nigeria.
Stepping out of the plane, a wall of heat hits me as I notice how smart the new glass and steel terminal building looks, set in a flat landscape of short green bushes and butterscotch and peach coloured sand. Our driver Sanusi is waiting for us with a dark blue pick up truck he is somehow dwarfed by. I realise this is similar to some government vehicles and so draws attention from pedestrians.

We are guests of Jumoke, Toyin’s sister. She is an imposing, handsome woman with
the kind of physical presence which leaves you in no doubt who the boss is. Fluent in all three major Nigerian languages and with fingers in many business pies, she is addressed as ‘Momi’  by all who work for her. It is convention here to use terms such as Auntie or Uncle, Sistah or Brudda etc, depending on the persons’ age in relation to yours, or if you come from the same village. It is unnerving however, to be called Daddy by someone you’ve only just met.

After freshening up, chicken rice and spinach is served, followed by water melon
and pineapple. Later in the evening, a visitor arrives and there is a discussion about
leases, land and mining. Mining is one of many business pursuits for Jumoke, and the main reason she upped sticks and moved here from Abuja. The man brings out an uncut ruby which we place on a smartphone lamp to see the bright magenta colour shining through. It looks curiously like a fruit gum, or a chunk of turkish delight, but is indeed
the real thing. The sapphire he had looked more like a grey pebble you could pick up on
a beach, and a little imagination was needed to picture these stones in a cut and polished state. Most impressive though, was a polished gold nugget, the size of a Brasil nut,
and I’m certain it weighed the same as the coffee table.

The same wall of heat hits me after dark as I step outside to make my way to our apartment. By lamplight, I see one or two moths, but dozens of large cockroaches
spread around on the concrete yard, on the walls and on tree trunks. I step back
indoors very carefully to avoid an unfortunate crunch.

In the morning, some distinctly unmusical parrot-like squawking in the Neem trees outside turns out to be a pair of Long-tailed Glossy Starlings. Back in the seventies, 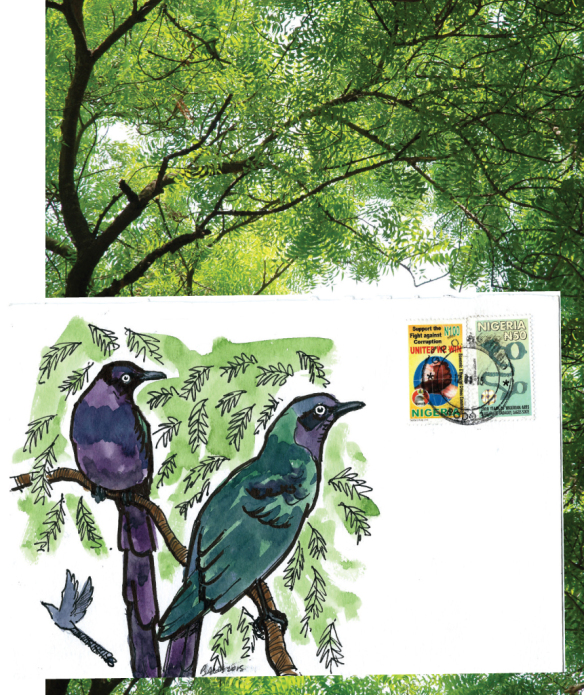 I was familiar with these birds from ‘The Handbook of Foreign Birds’, where they were described as not for the novice, and could be quite aggressive towards weaker inmates
in a mixed aviary, so best kept on their own or with other glossy starling species.
There is a certain air of confidence about them, something of the pirate, too.

More than forty years later, it really is satisfying to see these (and other) birds in the
wild, which were forgotten memories from the pages of a book. Happily these were to
be a common site on car journeys for the week, regularly seen flapping from bush to bush carrying their very long tails behind. I make a postcard of them, and of the cooking pots
in the yard. 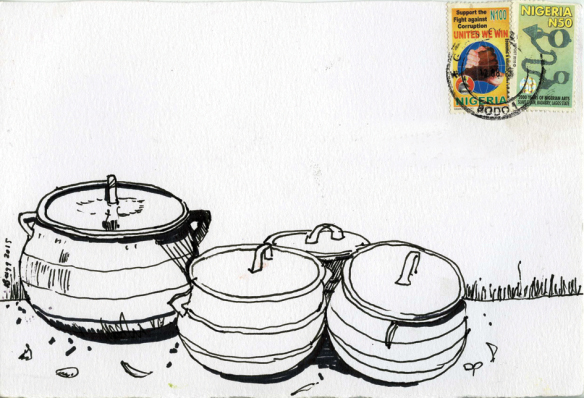 These barns have been neglected for many years and are now being refurbished and converted as so many are. When I first knew them, they housed farm machinery
and were home to several donkeys, who spent their days mooching about in the yard.

A sketchbook drawing made with ink wash and felt tip pen, with the sun low and to
the left. There always seems to be a traffic cone somewhere in the scene these days,
and this is no exception. Tempting to highlight it in that pinky red… 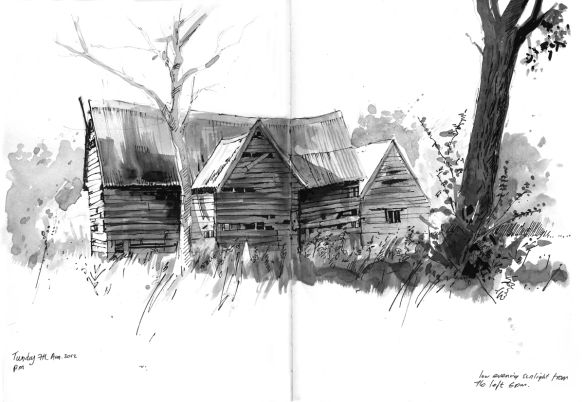