Towards evening, we collect artist Oscar from one of the bus stations who has endured the hot and uncomfortable day long journey from Abuja and is commissioned to produce some batik fabric to be used on table and altar tops. A good looking, trim man in a dark t-shirt and jeans with pointed tan leather shoes, a big grin with perfect teeth, he looks much younger than his 49 years, and is one of those expressive, driven characters that as well as working with fabrics, produces poetry, sings, paints and even dances. In the next few weeks we will have many conversations about art, the importance of being focussed to achieve your goals, western values as opposed to African tradition etc.

Early next morning I turn the bedroom fan off – a relief from the noise – together with the generator, it’s like sleeping on a helipad. The quiet still air in the kitchen has a pleasant aroma, a mix of fruit, last night’s cooking and cleaning materials. Mangoes are piled high in the fridge, as it is the height of the season. They are especially sweet and juicy, and in the coming week there is not much room for anything else in the kitchen, save for a couple of bottles of beer and a tin of Peak Milk! A box of matches is balanced perfectly on the cupboard doorframe, where Auntie Sade the family cook habitually leaves them. You could find them in the dark.

I stroll outside with my coffee and scan the trees in the compound opposite. I always do this, looking for anything interesting that may show up. This morning a pair of kestrels are noisily flapping in the top of a fir tree, a western grey plantain-eater flies in and clumsily lands at the top of a masquerade tree, and a group of starlings busy themselves from one tree to another, and then fly off out of site, the reddish brown flush on their wings standing out from the overall near black plumage. A new species for me, I identify them in my trusty field guide as forest chestnut-winged starlings. Because we are here in May, the migratory black kites are all over town, wheeling skilfully low over the streets on constant lookout for a morsel or an unsuspecting lizard. I made them the subject of one of my hand-made postcards back to the UK. 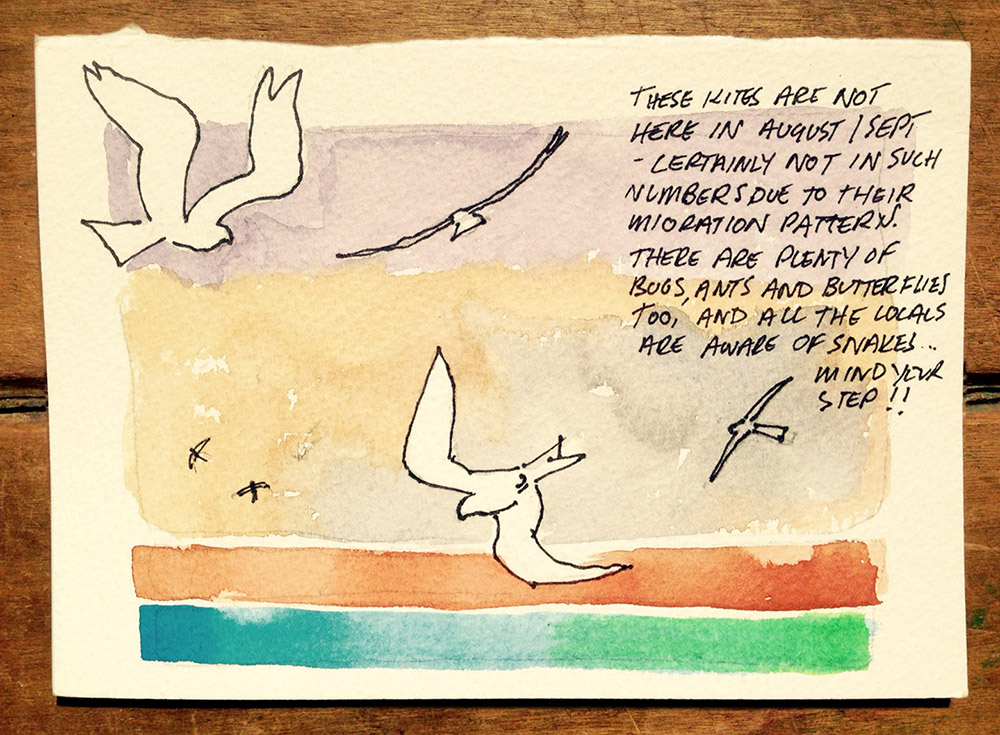 The next few days are taken up with trips into town, the business of the day often involving standing around in banks for long periods. Either depositing sums to pay a bill connected to the funeral expenses,  or using the ATM to withdraw. Sometimes three separate banks were visited in a morning. And again in the afternoon. By the end of the trip we were at least on nodding terms with most parking attendants in all the major banks in town!

Naira bills are counted with a machine, the operator wears a mask as a token protection from the micro dust, (some bills are very, very dirty) and the question “are you the last person?” is heard more and more as Nigerians in general are getting used to the idea of how a queue is supposed to work. That’s not to be unkind, many a road journey is made twice as long as it need be due to the selfish behaviour of many drivers. No lane discipline. That and the potholes of course.

Alongside the reliable yet slow ‘desk to desk’ method of completing paperwork, some aspects of modern life are being tested out in countries like this, such as biometric data gathering for setting up an account, either in a bank or with a cell phone company, for instance. I’m wondering how a cashless society would work here, as cash is very much part of the day-to-day culture, and long shall it remain so. In established businesses such as banks, there is a delightful mix of old but serviceable wooden furniture, ceiling fans and modern office chairs, with slightly grubby looking computers, and piles of paper files sit alongside the teller’s smartphone. It’s as if the ultra modern world is being shoe-horned into a hot, dusty climate almost against its will. It has its own charm. Modern electronics companies, such as cellphone company retail premises, are very polished, with pull-up banner stands supplied by the marketing people at HQ, smart well-trained staff and keen and helpful doormen, usually wearing eye wateringly bright coloured shirts with epaulettes and black trousers and boots, all topped off with a beret.

Oscar has spent a couple of days getting a feel for the place and its people, and is ready to design his batik covers. He has been commissioned to produce something with a flavour of Baba’s home town, and has teamed up with some local artists to use their facilities. We go along to see the work in progress.

By now Suraju has all but commandeered Toyin’s walking stick, which seems to suit him, gesturing with it while chatting to acquaintances when we are queuing at the ATMs. He buys a bottle of roasted peanuts from across the street, as we’re all a bit peckish.

Batik is a traditional craft for this area, and so is the use of indigo dye, though Oscar’s work is going to be black and white. The guys are working on tables that are half in, and half outside of the studio. I notice two infants asleep on a blanket on the floor inside, so we carefully avoid waking them. All is smiles as we take photos. Oscar larks around showing off the fabric, and sings a (long) song. I’m invited back to try out the technique for myself, which I’d like to do, but that’ll have to be some other time.

We were also checking the progress on work to improve the drainage and generally tidy up the old family house in Isale Osun. A local civil engineer was brought in to advise, and some boys had been set to work. The young foreman even contracted malaria at one point so we obtained the ‘one fix’ solution from a nearby pharmacy for him. He carried on working. Never let a spot of malaria slow you down eh?.