Up early to witness the goings on in the back yard. The air is slightly misty and cool before the sun comes up. I’m already too late to witness the slaughter of cow number one, which is now pumped full of air, I’m told to make it easier to clean off the hairy coat from the skin. There is the inevitable comparison to Pink Floyd’s famous inflatable pig from the “Animals” album cover. Some boys look on before starting work on the cobble driveway again. Nothing is wasted. Our slaughter man proceeds to dismember the animal on blood soaked concrete and plastic sheeting. There are no prime cuts here, just meat and skin in chunks. When served up, it’s a matter of luck if you end up with a piece of meat that isn’t very chewy and tough, but that’s how they roll here. I witnessed the demise of cow number two, took video and photos for my own education, I guess, but perhaps not suitable for display on this page. An education, certainly.

There is a general mood building, and has been for a couple of days, part excitement, part sadness. Austin has finished installing lights along the compound walls, inside and out, which are now newly painted and smart.

Baba Lawoyin’s immediate family, including myself, are wearing blue and silver outfits for the wake-keeping day. Waheedi the taylor and his team are late delivering them to the house, understandably as he has outfits for tomorrow, including friends and associates of the family to produce and deliver. It’s a big task. I am changed and ready. I have the honour of collecting Baba, together with eldest sons, from the mortuary at the hospital, where he has been ‘on ice’ since March.

At the hospital, we are invited to inspect the workmanship of the funeral parlour team in presenting Baba in perfection, led in his open coffin, looking at total peace. He is dressed in a glorious vintage style white cotton gown. It is hot in the sun, and the odour of the embalming fluid is too much for me and once experienced, is never to be forgotten. While discussions are held and we await the arrival of the hearse and the band, I seek the shade of the ward block nearby. The nurses have nice white uniforms with matching shoes and white bonnets with a red band, and appear to be a throwback to the 1950’s, but very smart. It is a peaceful, sunny morning, with a Woodland Kingfisher calling from a thicket in the hospital grounds, and butterflies flitting lazily past.

The bearers and the band arrive to escort the coffin back to the house, and we follow. The mini bus and the hearse stop 100 yards from the house, everyone gets out. The band strikes up their drum and trumpet tune suitably loudly and the bearers hoist the coffin aloft, the two dancing girls at the head of the procession. Family members are invited to carry the coffin (symbolically, the bearers always in control) and it is set down, raised up, turned around, and when down low, family again are invited to dance around it, laying money on top, as is tradition. It all looks flippant and casual, but is in reality tightly controlled and choreographed, and looks amazing. It’s a good twenty minutes before the procession reaches the courtyard and places Baba where he will rest for today and tonight, before the church service tomorrow.

The music continues. An elderly man no-one knows and dressed in a bright yellow kaftan is clanging two pieces of metal together rhythmically hoping for dash. A talking drum band play on throughout, people placing notes on their foreheads encouraging them. They respond with louder, faster drumming. People are dancing, taking photos and video on their phones, and there are many bystanders. Oscar shows off his dancing skills as Baba’s coffin is placed on its plinth. Austin mocks him playfully by pretending to place money on his forehead. It is a celebration of life, after all, and uplifting to witness.

When the dust has settled, there is still much to do. There is a constant supply of jolloff rice and sweet potato served, group photos taken, bottles of beer drunk. In the afternoon, the Pastor from the First Baptist Church, Oke Okanla, (where tomorrow’s service and burial will be held) arrives with his team and delivers a service in the yard complete with choir. The heavens open, lashing rain pours down but thankfully we are mostly kept dry by the awnings and canopy erected just hours before. On the table in front of the Pastor is one of Oscar’s batik designs. The official videographers somehow keep their equipment dry. The rain on the roof almost drowns out the words spoken, there is a service sheet, but everyone seems to know them anyway.

In the afternoon, ladies of all ages come from the old town, singing and clanging small metal bowls together, celebrating Baba’s life. They come into the house and sing and chant phrases led by an elder, and I guess, as in much of local custom, they have the opportunity to leave slightly wealthier than when they arrived… All are dressed in specially prepared and coordinated traditional attire with different blue and yellow schemes.
Infectious and emotional.

The ladies in the back yard were cooking food for tomorrow’s celebration feast, and would be there all night. There were stoves fuelled by gas, and the main fire was still going strong. Earlier the slaughter man had boiled the whole cow’s head, horns and all, in a large cauldron over this fire. He readily posed, without any prompting, holding a horn in each hand as if balancing the head in the cauldron. Today’s cheap plastic bowls and utensils are eye-catching and colourful, but I couldn’t help thinking that only a few decades ago, this would have all been done with grass baskets and clay pots. I was offered a meat roll, which was delicious. There are those that will sit with Baba all night, keeping a vigil, though I decide to get my head down for a while, as tomorrow will be the big day. 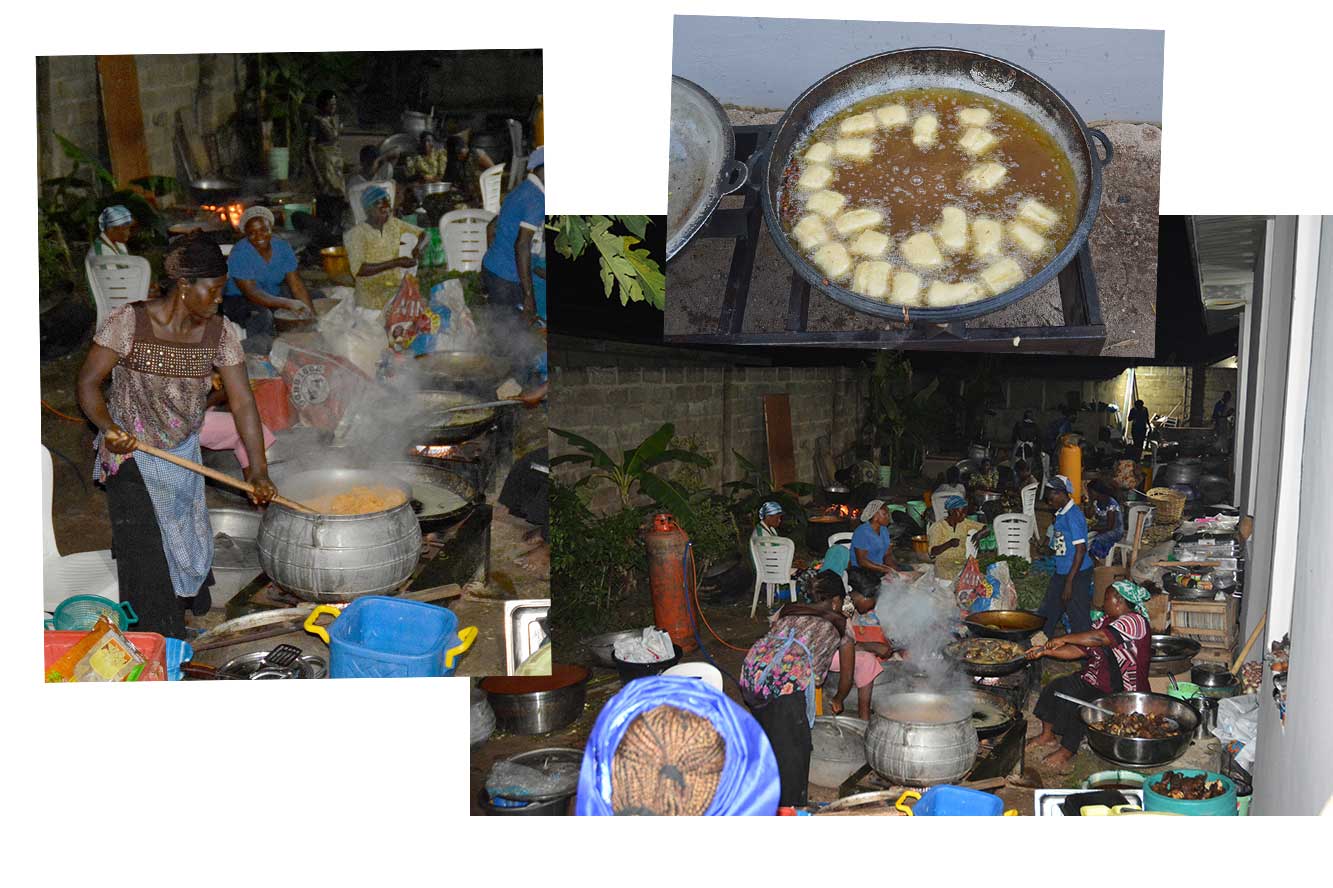