New year, new paintings. Attracted outdoors by a welcome break in the flat grey days we’ve been subjected to,
the bright sun streamed across this lane, sparkling off the wispy young hazel growth and bathing the near bank
in sunshine. Essentially looking into the light, my challenge was to convey this drama with little tonal value changes for the most part, and try to describe the brightness.

I decided to rework the hedge when back indoors the following day and re-establish some values. A few flicks of white for sunlight catching the branches is easily overdone, I think I got away with it. Win Green Hill in the far distance helps the feeling of depth enormously.

Marden Hill, between Welwyn Garden City and Hertford. An area of largely unused paddocks and meadows popular with dog walkers and the occasional birder. Overhead, Red kites are now common, and Ravens soaring in pairs is no longer a rare site, as in much of lowland Britain. I was fortunate to disturb a Redstart on autumn migration in the low, berry laden brambles that cluster around some remaining fence posts. Nuthatches quip in the high beech trees and oaks that sit on the high ridge, exposed to the wind.

Still very warm in September, the exposed trees on the edge of the wood drew my attention. Several trees had fallen, leaving a gap that threw those that remained into relief against the sky. They seemed to stand defiantly at angles competing with each other, rocking in the breeze.

I made this quick sketch in gouache and coloured pencil on a red ground, aiming to record the late summer afternoon mood.

Going back several times to the same spot, producing a pencil sketch and then painting in oil on card (old backs of drawing pads, primed with acrylic, can be very useful when you are fresh out of ‘proper’ canvases or panels).

The afternoon sun streamed through the wood, catching the top of the young tree in front of the tall, swaying beeches.

I like to visit the same location in different weather conditions, time of day and even seasons, to get to know it well – picking out likely spots to paint or draw. This area, with its scattered mature trees planted with intent many years ago, now has the look of a forgotten landscaped park.

There will be more to be had here.

It’s mid-summer. The early morning sun lights up the long grass and all is a grey orange, hard to describe but wonderful to look at.
In the field beyond my weed filled ditch is a rotation crop full of blue flower. There seems to be a bee every square metre, and there is a gentle hum.

Over the next couple of days I try and capture my response to this on a small 8 x 10 canvas. It takes several sessions of about half an hour each, and stopped when it all ‘felt right’. 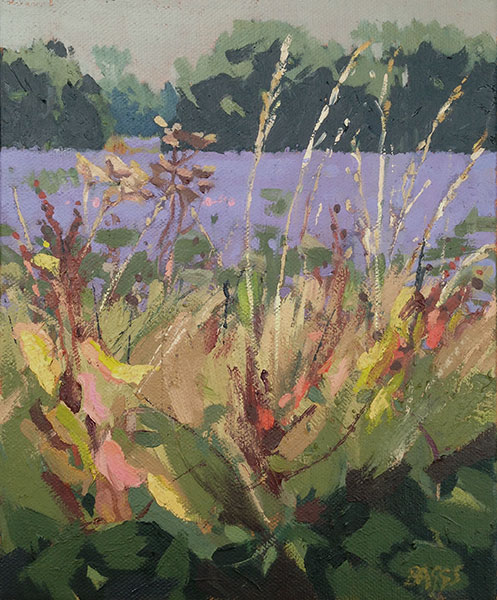 I went further with the theme but with a completely different approach,
and created a paper collage of the same scene in the studio.
This time I included one of the butterflies that passed by regularly as I stood there. 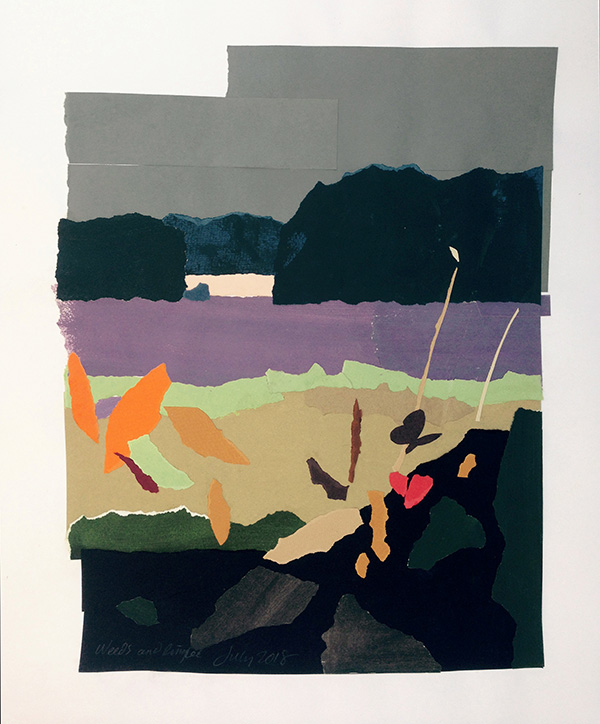 It’s early summer, the weather is good, time for a warm up painting or three before I sling all the gear in the car and try my hand at a few en plain air landscapes. Looking around in the garden for potential subjects I noticed a red chair and big yellow plastic bin calling attention to themselves under a fruit tree that sails across at an angle, on which I’d hung a basket of lobelia. There’s a nice balance where the viewer’s attention is kept by the colours and angles, with the shadow of the tree taking you back around. I moved things around slightly here and there until I was satisfied with the placement of the objects, and then started to loosely sketch onto an 8 x 10 inch canvas. It was then that I noticed the patch of long grass and nettles behind was a bit bland, so I placed an aluminium pot there to ‘fill the void’. 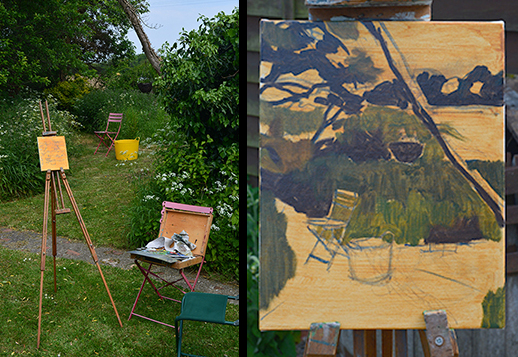 I usually cover canvases with a thin layer of raw sienna to avoid painting on white. After a simple pencil line I go over this in very thin ultramarine to roughly indicate the main spaces, and then thinly block in the dark areas. I’m also using my oldest and much loved wooden sketching easel which I’ve repaired a few times. It’s not too stable out in the open in even a slight wind, but you make do. Hanging a heavy kit bag on it helps a lot.

I’m also using a very limited palette of just two blues (ultramarine and cobalt), two yellows (lemon yellow and yellow ochre) and two reds (light red and cadmium red) plus white. I can mix everything I’ll need from these, even using the white sparingly. It’s good discipline too, and will help me avoid using too many unnecessary colours. I prefer turpentine to any other medium, not just because I just love the smell!

As I was working just outside my own back door, I took my time and completed the picture in six sessions of about half hour each, over a couple of weeks. Partly because the shadows had to be in the right place and therefore the sun had to be shining! I spent nearly as much time looking and assessing and making decisions about what comes next or what to change as I did actually painting. This is normal for me, it’s an all consuming experience. I was careful to describe the aluminium pot in just a stroke or two, and the yellow bin didn’t need much work at all, you can see the stain of the raw sienna on the canvas easily. The only area I’m not too sure about is the patch of nettles but overall the finished painting is ok. On to the next one….

Misty distant woods and field margins. Hares, pheasants and deer tracks.
The sound of running water, the ‘good earth’ aroma of autumn leaves.
As I wait for my washes to dry enough to carry on, it starts to rain.
Fine, soft rain, but enough to force me to abandon this painting.
The four hares in the field remain undisturbed. 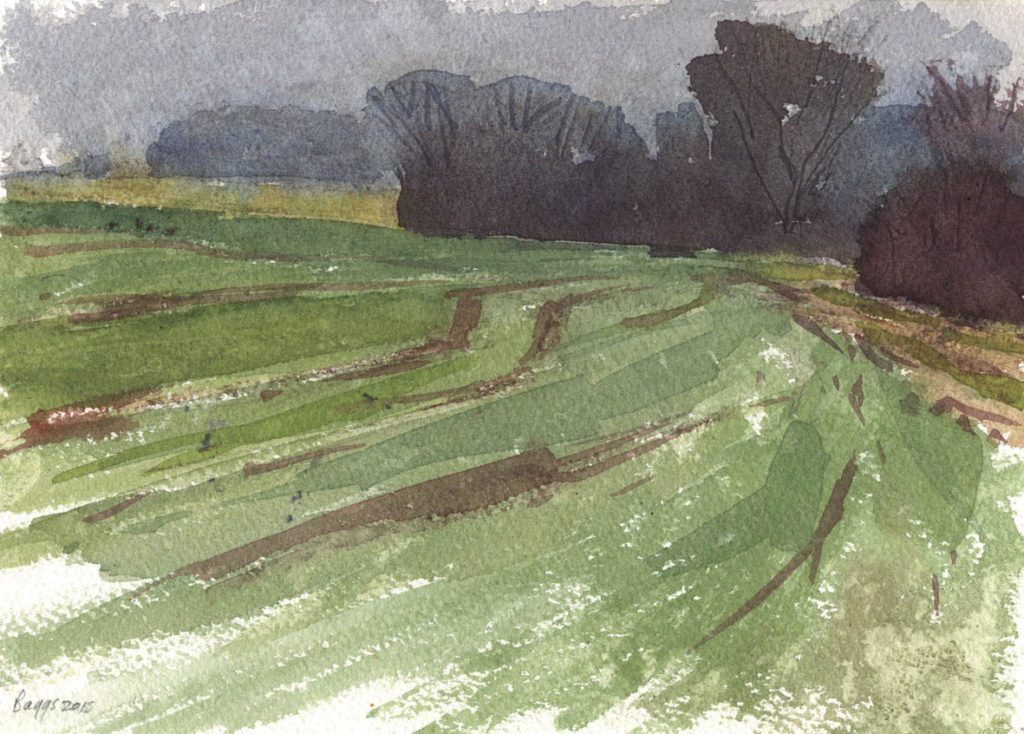 This is Blake’s Wood, local nature reserve of predominantly Sweet Chestnut, Hornbeam and Oak. I’m in the small parking lot, using the bonnet of my car to double up both as an easel and a table to set out my gear. All quiet, sun low but still bright, the different spring greens now merging into similar mid tones as they mature. The faint aroma of the honeysuckle climbing up the tree next to the sign board is attractive enough, but not the subject of this picture. Instead it’s the evening dappled sunlight, the loud, warbling burble from the Blackcap who seems to circle me, first behind, then here, then over there.
It’s the light falling through the leaves and onto the ground. The sign board invites you to engage, you are here on the map…have you seen all the woodland creatures they mention in the text? Yes of course.

A stranger arrives and parks up. He comes over “can I see?” Yes of course. “Nice”. We chat about wildlife in general, and conclude we have both heard a cuckoo nearby, an ever rarer treat that was once much more common. With camera equipment and a natty camo t-shirt, Adam explains he’s off around the corner where there is some remnant heather heath, hoping to capture a shot of some adders that he’s seen there, bathing in the evening sun. Just great. 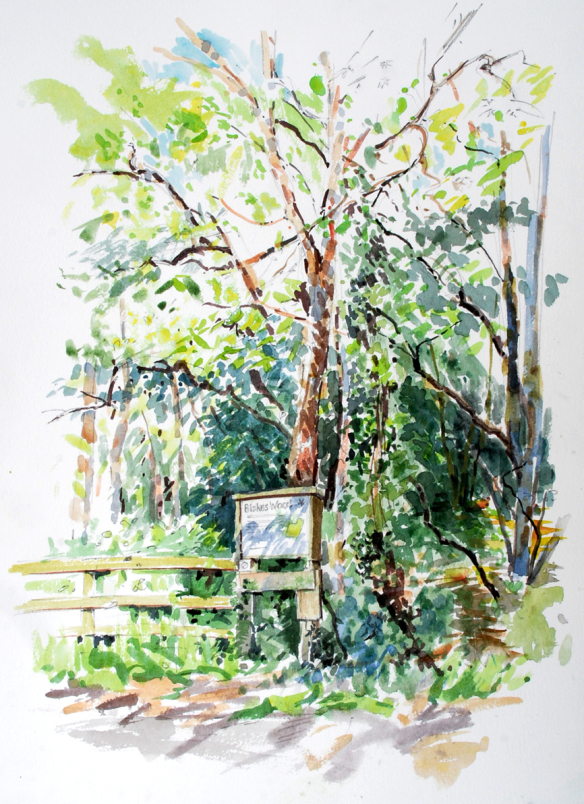 There is a local spot where a country lane passes through a shallow ford and
winds its way on up through arable fields. The small river is lined with large
willows and the odd poplar, and dog walkers and joggers use the riverside
path daily. There is an expanse of sky where, as the lane reaches the top of
the slope, cyclists, runners and walkers can be silhouetted against the
sunset sky as they disappear over the crest of the hill.

The first painting in this set is of willow trees at the edge of the stubble field,
at a bend in the small river. The sun was setting behind cloud and I had a
limited amount of time to finish, but I was aware that the sun may drop below
the cloud as it set, any time now. Everything was going well and then suddenly,
the whole scene in front of me lit up bright orange. In my concentration I had
forgotten the sun would drop below the cloud and I wasn’t expecting the bright
wash of orange light that changed all the colour values, even the shadow lines
of the stubble became a vivid blue.

I quickly made some adjustments and tried to place these colours, glancing
across to my right as the blinding low sun shone golden yellow in my face.
Then it dipped below the skyline and the scene reverted to how it was before,
although this time I had only minutes before it came too dark to see what
I was doing! I carried on until I couldn’t see anymore. The sienna ground
on the canvas has helped a great deal here in showing the brief overall
glow of the setting sun as the orange light washed over the whole scene.

The following evening I added a few touches here and there, and turned
to look at the riverside trees behind me. Getting dark in about forty five
minutes I looked and looked, assessing whether I had time or not, and
decided “yes I have”. This is a bad habit to get into, looking at the subject
from all angles for twenty minutes, then decide “Meh…” and walk away.
Procrastination never got anything done.

I mixed up the three basic colours of the sky, trees and field and applied
the paint very rapidly, working the brush in all directions at first, adding
touches of varying tone as I went.  The result is a lively sketch of the sunlit
sky disappearing behind the trees. Stood in one field, looking across to the
edge of another, with the lane sunken slightly in between (represented by
an untouched streak of the blue ground in this picture.

The peachy colour was all I could muster in the fading light and doesn’t do
justice to the vibrance of the actual scene, but what I do like is the honesty
of it, the “there it was and now it’s gone” feeling from quick sketches.

A couple of days later I returned to the same spot and waited until only
about 35 minutes  of painting time was available before it got too dark
and produced another canvas. This one shows a much gloomier clouded
sky loaded with rain with just a glimmer of light showing at the very
end of the day.

There are also roadsigns here which are a looking little tired and may
make an interesting counterpoint to the natural elements. I’ve omitted
them in this picture, but produced a couple of quick charcoal notes to
remind me to go back and look again, one with roadsign, one with jogger.

This is the sketch looking up the lane from the ford, which may be the
next paining in this series, using the battered old signs to contrast with
the natural elements in the landscape.