I found these interesting, ivy covered oak trees in a narrow lane in Essex.
This lane hasn’t been widened, probably as it’s a quiet backwater with little traffic,
and so the trees are old and still in place close to the edge of the road. The field opposite
has just been rolled ready for drilling, and beyond is a large copse. I came across
them with the sun directly behind, and as there was little colour I used black ink
for this drawing. 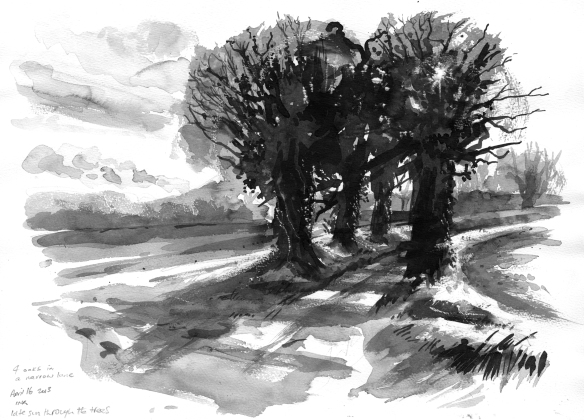 A few days later I returned to the same spot, and in the opposite direction, the lane meanders away with trees large and small dotted along either side. I was attracted by the deep lavender grey of the rain cloud lit by the sun, a rare occasion where the tree branches are a tone lighter than the sky, and worked up a quick watercolour sketch. There is even a telegraph pole, one of my favourite motifs for suggesting rhythm and perspective, and most of the trees have a significant amount of dieback in the upper branches which makes for interesting shapes. 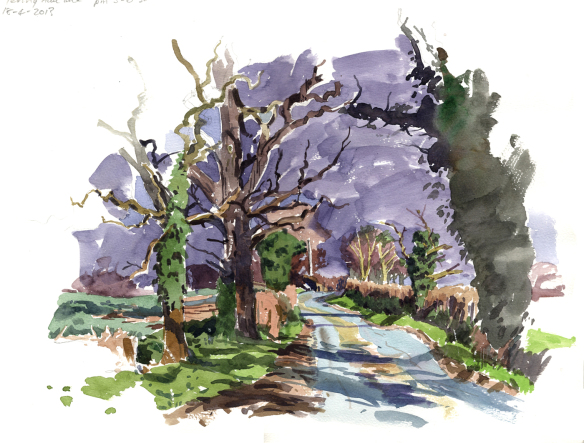 So taken with this scene was I that I decided to come back and produce a larger scale watercolour of this view. Most country lanes in my neighbourhood are not this ‘pretty’ and this scene could be straight from 1947, the only modern element being the oilseed rape in the field on the left, and perhaps the amount of dead branches on the trees.

It took an hour and a half to block in the main elements on the first session, before the light changed too much. As I was painting the spring afternoon light above all else, I was keen to finish it before the leaves opened much more. With that in mind I had to return three times before I could finish the shadows under similar light conditions, spending another half hour. I prefer to complete a picture in one session, as it’s not always possible to return,  especially with the same weather conditions!

6 thoughts on “See that sunshine”