Wednesday evening cousin Yomi took us to nearby Abeggi, or ‘bar behind the trees’ for a Guinness or two. Having a drink here is something of a tradition when we’re in town. Basically an open grass space with a bar and dj stage at one end, in front of a line of very tall masquerade trees. There are low clipped hedges around the perimeter, and very little lighting. The outdoor tables and chairs are the stackable, plastic type, and easy to move around when it rains (frequently). The waitress service is quick and the music is foot-tapping good. It is always a good idea to cover up though, as the mosquitoes are always ready and waiting. Last year three of us were sat here, Yomi, Toyin’s brother Ayo and me. Ayo was talking and I suddenly interrupted…”Did you see that?” I asked. “Yeah I did” Yomi replied. Ayo had his back to a UFO as it flew over, with solid blue and red light, covering all the sky in a straight line, in about three seconds. Too low and fast to be a plane or chopper, and who knows, one of ours or one of theirs. We’ll never know the truth of what really goes on in our skies!

This evening we repaired to another bar, more akin to a member’s only drinking club. The cars outside are mostly new four SUV’s and BMW’s. The owner was genial and pleased to see us. It was obvious Yomi is a regular. Some other regulars were huddled in the half-light around a table lit by a candle in a jar. We placed our order for beers. “Are you having the fish?” inquired Yomi. “Um, yeah?” I replied, thinking it was a spicy table snack, like the peppered beef on cocktail sticks at Abeggi. Suddenly the threatening grey clouds emptied what seemed like angry gallons of warm rain upon us at once, with strong gusts of wind threatening to blow our canopy away. We headed for an open door, water sloshing everywhere, and found ourselves among crates of beer and stacks of plastic furniture. No lights. We all thought this would be a fine alternative if we were to be stuck! The bar owner came to the rescue with flashlight and umbrella, escorting us one by one into the main building, cautiously negotiating the deep drain channels (fine in the daylight but in the dark?) now running fast with a mini torrent of water. In the low light of the indoor bar, past the kitchen, a tv was showing English football behind a bar in the corner. A couple of guys were sat on bar stools watching. A group of drinkers sat at a low table to one side, as we headed for the back of the room. A low ceiling and the dim light levels created a strange atmosphere, but we were relieved to be in the dry. Our fish arrived. Absolutely not a snack. Each of us had a pretty reasonably large catfish, laid predictably in a fish-shaped white plate filled with hot and spicy brown sauce. I have to say it was really tasty, though a little too much for me, as we’d already had sweet potato and beans back at the house, but I made an effort. In the gloom I couldn’t quite see what I was eating, but as this was his ‘after work’ evening meal, Yomi tucked in with relish – eating the head, eyes and all. The sauce was the cook’s own recipe, and was truly more-ish, especially before it cooled a little.

The following day at the house, painters painted, Sunday continued his sewing and hammering, and there seemed to be more foam, more wood, more rubble everywhere. Then I realised some extra chairs had been bought (typically here, from a roadside seller) to strip down and cover with the new fabric. Here the armchairs and sofas are luxuriant in dimension and finish, usually some sort of leather style with shiny bits…an African thing. I supervised some boys planting the potted plants we bought to fill in the gaps in the border. Enjoying gardening as I do, it was difficult not to do it myself and the lads were curious as to why I would get my hands dirty rather than just tell them what to do.

Auntie Sade, the housekeeper, kept us all well fed. It got to the point where there were so many boys around helping with the building work, and all needing high carb food, she was less than happy cooking all day long. I understand her frustration, though Austin the electrician introduced me to freshly cooked yam with honey drizzled over it. Nice. 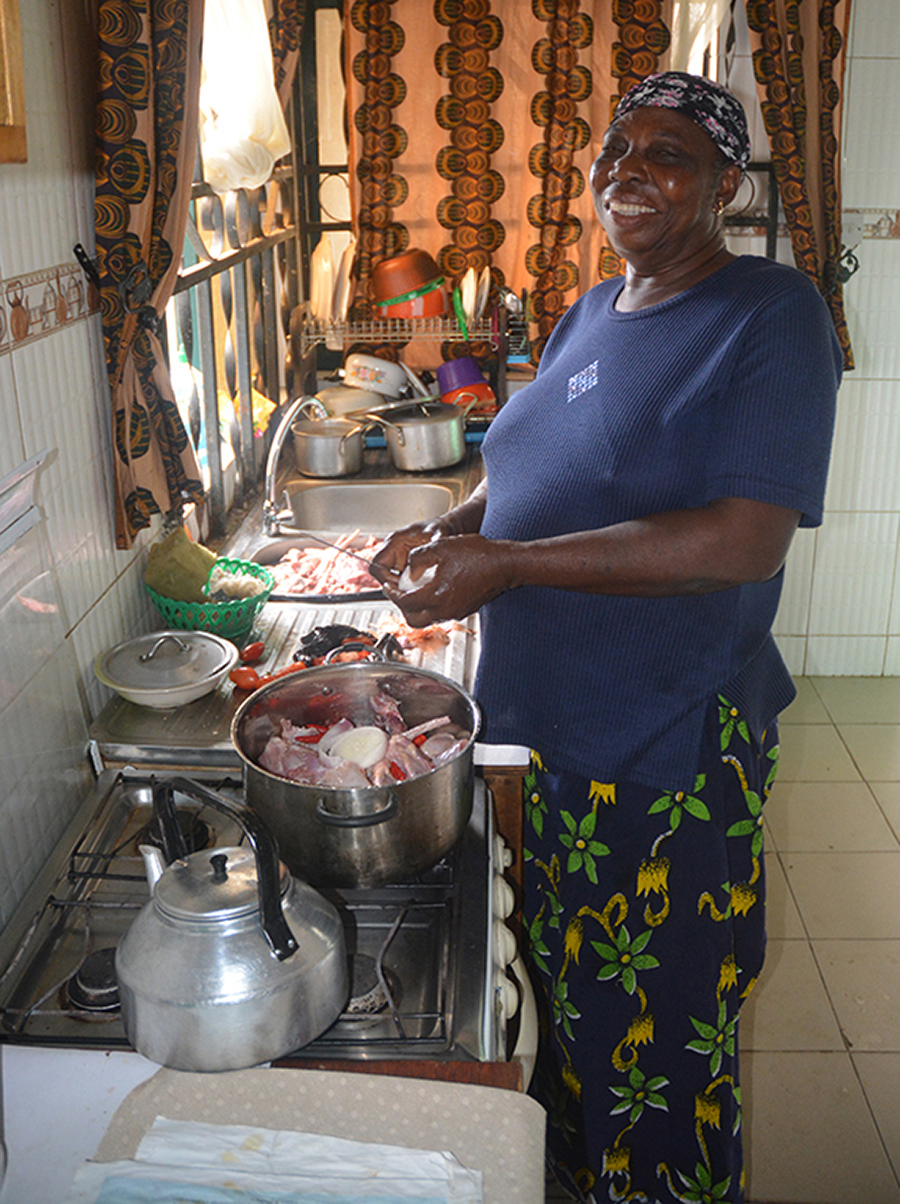 On the bare ground I noticed four lizard eggs, perfectly shaped, white, matt and soft. About 15mm long and seemingly just randomly lying around on the dirt and gravel, only losely together, which made no sense to me. I picked them up carefully and placed them out of harm’s way. I’ve no idea if they were viable, or if this scattering was normal, but people seemed to think so. Certainly the agamas are absolutely everywhere.

Out in town, we always pass the roundabout manned by two or three friendly traffic officers. Their uniform consists of black trousers and boots, white gloves and eye-wateringly bright plain orange shirts, topped off with a black beret. On a bright day, even they have a parasol handy. Recognising our van they wave us by with a salute and big grin, sometimes with a greeting shouted out as we pass, sometimes even after we’ve passed. Today was a bright day. I could feel the back of my neck burning as I stood in line at the ATM, with Suraju chatting with someone he knows nearby.

We’re also changing some cash sterling into niaira with the money changers in the Hausa district along Sabo Road on the south-east side of town. We’ve been here many times, and the guys recognise our car, shouting out their exchange rates as we pass by. This time we see an intense looking boy who has a nasty looking stitched cut on his palm. To us it looks a little inflamed, and we give him our anti-septic gell and instructions on cleanliness and how to use it. He is very grateful. We have to wait ten minutes or so while our cash is being changed somewhere up the road, so I’m invited to sit in his wooden booth out of the sun. Suraju closes his eyes, holding on to the walking stick (now fully commandeered) and micro-naps. We were to check on the boy the following week, and all was well, with the cut healing nicely.

The power steering on the van is getting stiffer, and we soon see we have a fluid leak that needs fixing today. Driver Ade takes care of this, and tells us of a boy killed on the road earlier today, knocked off his machine most likely, where the driver failed to stop and drove on regardless. A reminder that life is cheap here.

Back at the house, today’s rain is coming in quickly. Lashing, squally wind batters the bananas and palms and it’s a wonder they survive. Water runs down the street within minutes, and dries up almost as quickly. I take the opportunity to draw up a couple of postcards to send back to friends in the UK. I’ve been watching the weaver colony in the tree at the gas station, the drongos and kingfisher on the phone lines, but it is the Red-headed Malimbe, a type of weaver, that I decide to draw. I saw this in the morning on a palm in the gardens of the house opposite. A new bird to tick off.

This evening, Baba’s middle son Lalu and wife Maureen arrive from a long trip from Baltimore, USA. I’ve not met Maureen before, but we immediately hit it off. Yomi takes us all to the bar for beer and fish supper, but I decline the fish this time, opting to just drink the Guiness and watch the others enjoying the hot sauce. In truth I don’t think I could have finished it.

2 thoughts on “Baba’s last Journey Part 7: Are you having the fish?”